Legislative Updates: News from the Capitol

Lawmakers will return to Springfield this Friday, January 8th for a lame duck session of the Illinois General Assembly. Lawmakers are expected to meet through the weekend and next week, and once again, will operate under COVID-19 guidelines. This means that lawmakers will be spread out and accessibility to certain groups will be reduced – the Senate will continue to meet in their State House chambers and the Illinois House of Representatives will meet on the floor of the Bank of Springfield Convention Center. Additionally, access to proceedings will be very limited – the number of legislative support staff and members of the media will be greatly curtailed, and lobbyists access will be restricted (the session will be broadcast online though at ilga.gov).

The lame duck session will primarily deal with two major items, and likely none impacting SWCDs. The first is the question of who will serve as the next Speaker of the Illinois House. As you are likely aware, Speaker Madigan is the longest serving Speaker in the nation, having held the post for the better part of 40 years. Recent far-reaching federal investigations involving members of his leadership team and inner circle have cast doubt on his ability to effectively lead his caucus and party forward into the future, and this has effectively fractured the democrat caucus into three sperate camps; that of opposition, loyalists, and pragmatists waiting for the hint of a likely winner. Another enormous issue that will dominate the lame duck session is a package of social justice reform measures brought forth by African American lawmakers in response to events of this past spring. The backers of these measures had hoped for a fall hearing in the legislature’s Veto Session, however, the rapid spread of COVID-19 during the month of November forced a cancellation of the session. This package of reform proposals is expansive, covering areas such as criminal justice reform, economic equity, education, health care and violence prevention.

One issue that is unlikely to occur, due to the immensity of the aforementioned two issues, is an increase in the state’s flat income tax rate during the lame duck session. The lame duck session should be colorful in the least, and perhaps historical at most.

On December 15th Governor Pritzker announced more than $700M in spending reductions impacting the current FY21 state operating budget as a stopgap to backfill the budget’s nearly $4B hole. The information provided at that time indicated that a handful of agencies (IDOA, IDNR, IEPA, etc.) would share in approximately $43M in reductions categorized as “operational and grant reductions” – which could certainly (if history is any indication, at least) impact the work and operations of the SWCDs of Illinois. At this point, little specificity is known regarding the future/implementation of these budgetary measures. The basics such as where, when, and how much remains uncertain.

AISWCD quickly took quick action to respond to the announcement of potential cuts. We enlisted the help of allies – some new and some old – to quickly generate a letter to the Governor and legislative leaders of both parties formally stating opposition to any potential cuts that would adversely impact the conservation delivery infrastructure of the state. Additionally, we also provided a quick reference/educational component that provides a high level overview of SWCDs and their role and value to Illinois. Please feel free to review, and note that a hard copy of the educational piece will follow in the mail in the near future.

AISWCD will continue dialogue on this matter with lawmakers and policymakers as things continue to develop. Trevor Clatfelter, AISWCD’s contractual lobbyist, coordinated a meeting whereby he and Executive Director Grant Hammer had a very positive meeting with the Senate President and senior aides just a month ago. The Senate President was very gracious and interested – asking excellent questions that demonstrated a genuine interest and basic understanding of our issues. AISWCD will continue to oppose any future budget reductions, and advocate on pressing matters that strengthen the network of SWCDs across the state.

Senator Andy Manar (D-Bunker Hill) announced his resignation from the Illinois Senate earlier this week. Manar leaves to take a position in the cabinet of Governor JB Pritzker, as a senior advisor bringing his extensive knowledge of appropriations, policy, process, and politics. If you are unaware, Senator Manar was honored as the AISWCD Lawmaker of the Year at the 2018 Annual Meeting and Summer Training Conference for his efforts to assist SWCDs during the difficult period of the Illinois budget impasse. At first blush, one might assume this to be a devastating setback or loss for districts in losing an SWCD champion. On the contrary, however, the team at AISWCD views this very positively in that we have a friend joining the administration. AISWCD wishes Senator Manar the best in his new endeavor, and looks forward to working with him again in the future.

Senate Minority Leader Bill Brady (R-Bloomington), who has led the Republican minority caucus these past three years, also announced his resignation this past week. Prior to this, Senator Brady indicated to his caucus that he did not intend to seek another term as the Senate minority party leader, and Senator Dan McConchie (R-Lake Zurich) was elected to take the Republican leadership post. Just yesterday, McConchie announced his caucus leadership team;

AISWCD sent a letter of congratulations to Minority Leader-Elect McConchie in December on the news of his election. SWCDs might consider sending a quick notes of congratulations to any of their lawmakers above who have been named to leadership positions. Contact information can be found HERE.

News has exploded in the last 24 hours that Republicans have likely lost both Senate races in traditionally red Georgia, which may flip the balance of power in the U.S. Senate from Republican to Democrat led. This could have enormous implications for Illinois in that senior U.S. Senator Dick Durbin (D-Springfield) will have greater influence in that chamber. Durbin, along with colleagues on his side of the aisle, have championed a federal relief package for state and local governments across the country to assist with revenues lost due to the COVID-19 pandemic. Democrats, potentially leading both chambers of congress, could pass a federal relief measure to President-elect Biden that provides state’s with economic relief. Illinois current FY21 budget has a $4B budget gap, partly due to pandemic related revenue losses (and combined with the failure of the Fair Tax proposal). A potential forthcoming federal relief package may have the potential for offsetting the need for steep budget cuts here in Illinois or spending reductions – only time will tell, but we will be sure to keep you apprised of developments.

Much advocacy work remains to be done this winter and spring, and the assistance of our member districts will be needed in the future. SWCDs, working together and with one voice, will always be in a much stronger position. There exists a great need for lawmaker education and outreach. The demographics of the Illinois legislature and policymakers (eg, agency and cabinet officials from administration to administration) have changed dramatically in recent years. Our state legislature is overwhelmingly suburban and urban, more so than ever before. Our members and their districts cover every corner of the state, from the most rural to the most urban, and the conservation mission of Illinois SWCDs is thusly reflective of that – it is broad and extensive. Our challenge will be to connect this strength, this diverse conservation mission of the network of Illinois SWCDs, to the issues of importance to a majority suburban/urban legislature who are interested in issues such as climate, habitat, water quality, and more.  AISWCD would appreciate your support in coming times. As always, stay tuned!

What a great Earth Stewardship Day! Nearly 700 students from 10 area schools came to learn about the environment and conservation at 28 stations across the Illinois State Fairgrounds on Tuesday, May 17th, 2022. Director Read more… 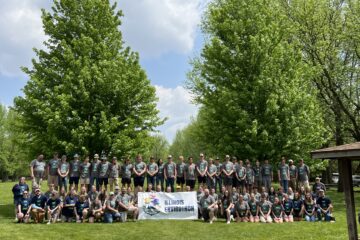 A team of high school students from the University of Chicago Lab Schools took top honors at the 2022 Illinois Envirothon State Competition, the 26th annual competition. The winning team will now represent Illinois at Read more…

Join us! It is our pleasure to invite you to the 2022 Annual Meeting & Summer Training Conference scheduled for Sunday, July 17th – Tuesday, July 19th at the Crowne Plaza Hotel and Conference Center Read more…